Home › New Zealand › A match made in heaven: Pokeno Bacon and Mercer Cheese

A match made in heaven: Pokeno Bacon and Mercer Cheese

There’s nothing wrong with the road from Auckland to Hamilton but it’s not one of New Zealand’s most scenic drives. In fact it’s easy to turn the radio up, put your foot down and push through without any distractions or deviations. This would be a mistake because, as the locals know, there are a couple of very important places you should know about, especially if you like cheese and bacon, and who doesn’t?

Driving south, 50kms from Auckland, is Pokeno. The old main road used to pass right through this tiny township but since 1992 it has it’s own exit from the motorway. Pokeno is famous for its bacon (my mouth is watering just at the thought of it), sausages and other pork products and for icecreams. The scoops- in- a- cone are allegedly the biggest in New Zealand and judging by the queue on a dismal winter’s day they must be doing something right.

Recently this tiny town has been in the news for its real estate potential as Hamiltonians look to live closer to jobs in Auckland and Aucklanders look to move further out to get more bang for their property buck. There’s a market every Sunday from 9am to 4pm in the paddock in the main street (yep, it’s that sort of place) and I would imagine, although I haven’t been myself, that this would be a truly authentic country experience. The sign in the paddock advertises live music, homemade Maori bread, chutneys, fruit and veggies, plants and seedlings, fresh eggs, bone carving, garden furniture and woodware. Something for everyone. 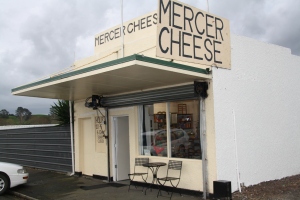 Just 5 minutes down the road is Mercer – a blink- and-you’ll -miss- it place dominated by an ugly service station. The best reason I can see to stop here (unless you need petrol) is to visit a small yellow building with a huge sign on top saying Mercer Cheese. It doesn’t look much from the outside but trust me.

Albert Alferink has been making cheese here since the early eighties and in 2009 he was the Champion of Champions at the Cuisine NZ Champions of Cheese Awards. Albert makes Dutch -style cheeses  (his Mercer Extra Mature with Cumin was his champion cheese) and yellow rounds of Gouda, Edam, goat cheese, sheep cheese, havarti, walnut cheese, nettle cheese, bel paso, parmesan, pecorino sit on his shelves and you can sample each one.  Here’s a clip from 2009 when Albert was the champion cheesemaker.

Things to know before you go:

*Pokeno Bacon is open Monday to Sunday 8am – 5.30pm http://www.pokenobacon.co.nz

*Mercer Cheese is open Monday to Saturday 10am to 5pm

So very happy to see this wonderful business officially open the doors of its fabulous cake studio today. Delicious cakes, sweet treats and lovely gifts too ( including sweet smelling soy candles 😊) And flowers right next door. It’s genius! @sweetcreationsnz @pinkpoppiedesignerflorist @simplycandlesnz
In need of something to sweeten the morning and apricot jam from @nzgoodlife with @vogelsnz is still the best #postgameblues #rwc2019