Home › New Zealand › An hour to kill in Auckland

An hour to kill in Auckland

On a recent rainy weekday I had an hour to kill between meetings. Rather than settling into a cafe with a coffee and a magazine, I decided to duck into the Auckland Art Gallery to see what’s going on.

Quite a lot as it happens.

Inside the gallery they are getting ready for The Light Show which opens in October and runs until February 2015. I love fairy lights so I have high hopes for this exhibition. Here’s what the gallery says we can expect:

From atmospheric installations to intangible sculptures that you can move around and even through, Light Show enables you to experience light in all of its spatial and sensory forms. Individual artworks explore different aspects of light, such as colour, duration, intensity and projection, as well as perceptual phenomena. They also use light to address architecture, science and film, and do so using a variety of lighting technologies.

There are already a few ‘light’ pieces sprinkled around the gallery. I loved the red and black Māori inspired pieces on the stairway to the North Atrium. I couldn’t figure out why there were so many  people in this usually quiet space until I saw a 12 metre-long table covered in thousands of pure white lego blocks. This is The cubic structural evolution project, a hands-on installation by Danish-Icelandic artist, Olafur Eliasson.The idea is that visitors use the lego blocks to create whatever their imagination can dream up. Some people create something entirely new, others add to a structure abandoned by a previous visitor. I watched as children and grandparents and all ages in-between sat engrossed in their work and marvelled at their creations. Spidery towers with intricate staircases and spirals, impossibly tall pyramids and clever circular shapes with unlikely moving parts. It’s a simple idea but brilliant.

On the Mezzanine floor I discovered the EH McCormick Research Library which offers an extensive collection of books on the visual arts to read (not borrow). There are iPads for browsing the online collections and magazines to flick through (including my favourite The New Yorker). It’s quiet and interesting and another reason to love the Gallery.

Across the street from the Art Gallery is Khartoum Place. After many years of wrangling, the City Council has finally given this wee gem the face lift it so desperately needed. The wall murals depicting the anniversary of Women’s Suffrage and the cascading waterfalls are untouched but there’s a new stairway, more glass and less concrete and the result is bright and colourful.

Inside the Auckland Art Gallery, guarding the door to the Light Show. 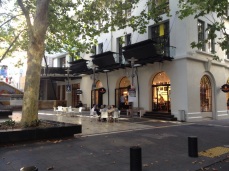 Khartoum Place links the Art Gallery with Lorne Street and the home of my favourite place for cheap street food. No. 1 Pancakes sells savoury and sweet Korean pancakes for between $3 and $4  and next door there are Chinese dumplings and filled steam buns being cooked on a trestle table covered with a bright plastic tablecloth. I watched while my special order pancake with no cheese was expertly filled and smoothed. patted and flipped and as I wandered back to my next meeting, I realised that an hour in the city is something to be treasured, even on a rainy day.