Home › New Zealand › The Mini: still cute after all these years

The Mini: still cute after all these years

Minis have always been more than just a way from getting from A to B.

One summer during a break from university I went on a road trip in a black and white Mini called Rory. We had a tent, sleeping bags and camping gear in the back but when it rained we slept in Rory. He made it across the English Channel to the south of France then deep into the Pyrenees to Andorra, and back again, even though his tiny boot was packed with rock samples (my companion was studying geology), chocolate and cheap red wine.

I made my first attempts at driving in Rory (I never got the hang of double de-clutching) and my heart broke the day his new owner came to collect him.  I’ve had a soft spot for Minis every since.

So to say that I was excited when a cafe opened inside the new Mini garage and showroom in Newmarket would be an understatement.

The cafe has a suitably English name – the Oxford Cafe – and the coffee machine is a patriotic red, white and blue. A review we’d read boasted of traditional English food like cornish pasties, pies and scotch eggs but we got our timing wrong and there were none to be found.  Nonetheless, I might go back just to see the Minis again because they were, of course, adorable (sorry Rory). 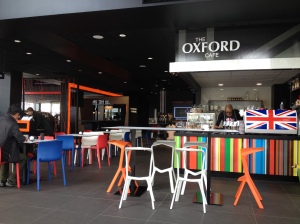 The Oxford Cafe is under the Newmarket Viaduct at 430 Broadway.