Christchurch is a city in transition.  The earthquakes that started in September 2010 and culminated in the devastating quake on 22 February 2011 forced the city to re-imagine itself and that is exactly what it is doing. The people who call Christchurch home have been living their lives amongst torn up pavements and road closures, detours and rubble since that terrifying day in February 2011.  They’ve watched the city change shape as broken buildings are removed and building crews move in and they’ve watched as wall murals appear, sometimes overnight, on canvases created out of the devastation. It’s terrible to contemplate what the city would feel like without the art and sculpture that now brightens the broken walls and empty city blocks in Christchurch. Art has brought splashes of colour and a dash of humour to a city that has had little to smile about.  I spent an afternoon recently walking the streets and being grateful for the visitors with their cameras breathing life into the city. I spoke to one of the tenants in the Re-Start Mall, a shopping centre created from shipping containers that was opened 8 months after the 2011 earthquake.  “We’re seeing more and more people coming back to the city centre” she said, “and that’s great but it’s still so small compared to what it was before”. Her voice trailed away, heavy with weariness.  It’s been a long road since 2011. 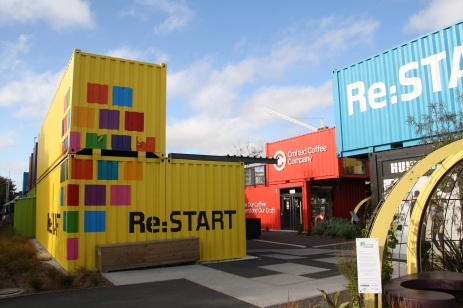 Christchurch has re-invented the uses for shipping containers. This is the Re-Start mall opened just a few moths after the February 2011 earthquake. The container-shops will be moved to other locations when they are replaced by more permanent buildings. 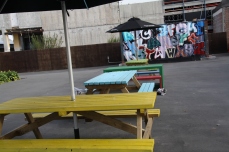 Every broken window in this empty building is a piece of art.

An empty corner of the city becomes a haven for sunshine and contemplation. 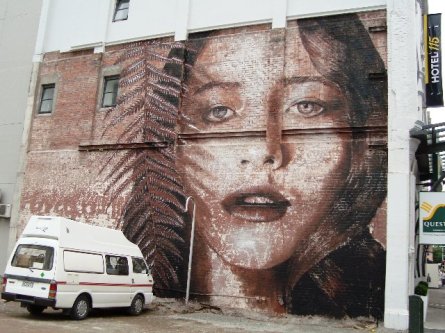 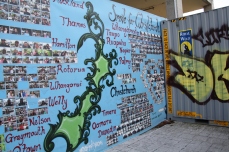 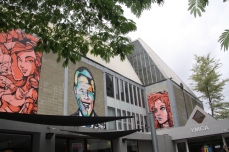 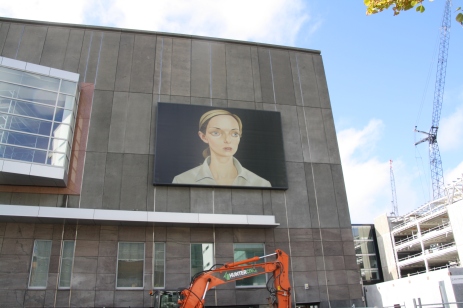 The heartbreaking site of the damaged Christchurch Cathedral