Home › An American Adventure › The beast in the east

The beast in the east

64 million people across 16 states are affected. Records are falling for the most snow in an hour, the heaviest daily fall, the biggest snowflake. 20.1 inches in Washington DC will make Jonas the biggest winter storm on record. A quarter of a million homes are without power. And it is very very cold.

People who know about weather say that Jonas is an historic storm with all the ingredients to create a blizzard with brutally high winds, heavy snow, coastal flooding and even thunder snow – that’s a thunderstorm with snow instead of rain.

I’m glued to the weather channel which is providing live coverage and it’s compelling. Coverage flicks seamlessly from one white-out scene to another with video of road conditions and deserted snowy city streets, forecasts and sever weather survival tips.  Reporters are out there in their cortex snow suits getting pelted with snow balls, looking cold and valiantly showing us why we should stay indoors.

There is a total travel ban in New York City and the NYPD have tweeted that they will arrest anyone caught driving. Across the storm path, people have been warned to stay at home but hundreds are stuck in their cars and even 4WD vehicles aren’t immune. The Duquesne University’s men’s basketball team have been stuck for 12 hours in a bus with only last night’s pizza to keep them going.

All flights cancelled out of major airports, there are no lights on in the theaters on Broadway and, for the first time in 40 years, it’s legal to sledge on Capitol Hill in Washington DC. In Philadelphia plenty of people are sliding down the famous Rocky steps outside the Museum of Art and the streets in Manhattan are crowded with cross country skiers.

President Obama is at home in the capital. The snow is so thick that it’s impossible to even see the White House but the soldiers of the “Old Guard” who keep watch at The Tomb of the Unknown Soldier at Arlington aren’t planning to stop for a little snow. Neither are the Carolina Panthers and the Arizona Cardinals who are scheduled to clash in a NFC game in Charlotte NC. Some things don’t stop for anything, even a monster storm.

Snow is really pretty if you’re admiring it from your cozy living room. A layer of the white stuff turns the ugliest urban scene into a winter wonderland but it’s not so nice when your car gets stuck in it or the power is cut to your house.

An opinion piece in the NY Times said it like this: “There’s something cartoonish about the menace of a blizzard, in which nature’s wrath assumes a fluffy, roly-poly form and tries to kill you.” Jonas is having a good shot at it but we’re prepared. Here are some shots from a walk around Bristol when the sun came out. 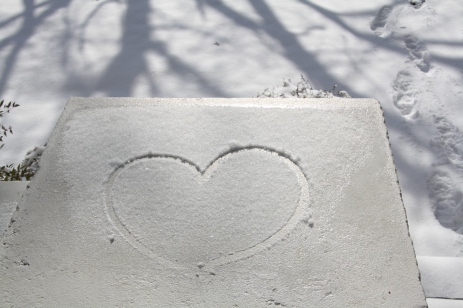 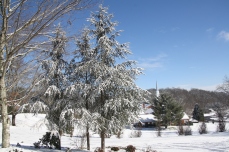