Home › An American Adventure › In the steps of Daniel Boone

In the steps of Daniel Boone

I spent a lovely couple of days exploring the tiny town of Cumberland Gap tucked at the foothills of the Appalachian mountains where, if you listen carefully, you’d swear you could hear the creaking of wagons and the sighs of weary settlers preparing for a long mountain trek.

The town is named after the Cumberland Gap, a natural pass through the mountains that was travelled by bison and elk and native American Indians long before it became the major route for pioneer settlers migrating westwards. In 1775 Daniel Boone cut a 200-mile road (although I use the term loosely) beginning at the Gap all the way through Virginia to Kentucky’s Bluegrass Region. It remained the main route between the east and west until  boats and trains made travel more attractive, and less taxing on the feet and buttocks!.

What the town of Cumberland Gap lacks in size it makes up for in charm –    a whitewashed wedding chapel, an old mill with a water wheel, a handful of colourful multistoried villas, a babbling brook and a spectacular ringside view of the mountains bursting with wild flowers and tree blossoms at this time of the year. The main street is wide and sealed but it doesn’t take a whole lot of imagination to see it as Daniel Boone would have over 200 years ago – dry and dusty with horses and wagons stirring up the dirt instead of Harley’s and 4 x 4s.

It’s a one horse kinda town. 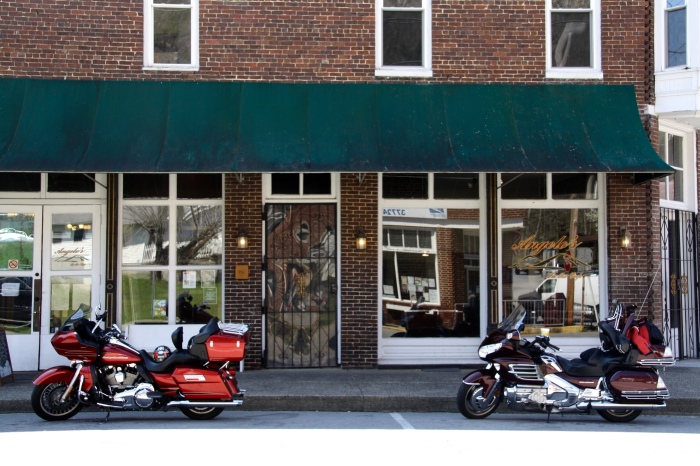 Harley’s instead of horses

These days, people come to  Cumberland Gap to relax and to walk the trails in the Historical National park that shares its name with the town. From one of the highest spots in the park you can stand at the place where Tennessee, Virginia and Kentucky meet. Geographical details like this still thrill me but I have learned to curb my enthusiasm in the presence of people who take such things for granted. At the top, someone from Africa has written in the visitor’s book. Now there’s a Kiwi there too.

On a warm Spring day, with only a day pack to carry and the comfort of a cold drink and a warm bed at the end of the day, it’s impossible to appreciate how over 200 000 men, women and children, walked across these rocky hills, sometimes in bare feet and only their dreams to keep them going. 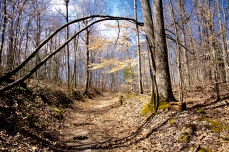