It never rains but it pours they say and this week it’s raining doughnut stories.

First, the bakery owned by my friends Carla and Randall Perkins, the Blackbird Bakery, was crowned best bakery in the state of Virginia by popular vote.  That’s no small feat given the doughnut crazy United States where glazed and filled doughnuts are eaten all day every day. Carla keeps the doors of the Blackbird open 24 hours a day, 6 days a week so all sweet tooth cravings can be satisfied, and pyjama clad, slipper wearing grazers are not uncommon.

On any day, the Blackbird sells about 2,100 doughnuts and I have had my share. During a 3 month house sit in Bristol, I used the Blackbird as an office and on snowy days I had a reading spot in front of the open fire. Despite not having a very sweet tooth I grew to love the unglazed blueberry doughnut but got even more pleasure watching others eat their cream filled, chocolate glazed and sprinkled cousins. I once watched a man eat a half dozen assorted glazed varieties all by himself. 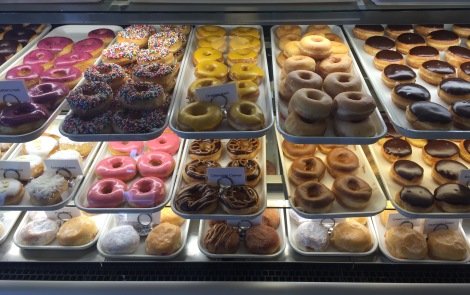 Then in another doughnut story, a crazy chef from Christchurch called Simon Levy created a slow cooked beef sugar glazed doughnut accompanied with lemon yoghurt ice-cream in front of 50 gourmands on an otherwise unremarkable Friday morning.
Simon Levy hails from the UK with unquestionable credentials (think Claridges,  The Ivy, The Berkeley Hotel and Gordon Ramsay’s The Warrington) and is totally in love with fresh ingredients and not averse to a little bit of foraging and creating controversy  on a plate. What that man can do with cauliflower and no cheese sauce in sight!

Controversy is where the beef filled doughnuts enter the story. It was hilarious watching the faces of the others in the room. The verdict on our table? Four out of five gave it a thumbs up but I think it will be a while before the patrons of the Blackbird Bakery give up their Bavarian cremes.